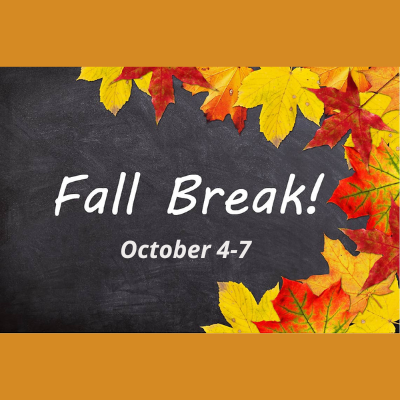 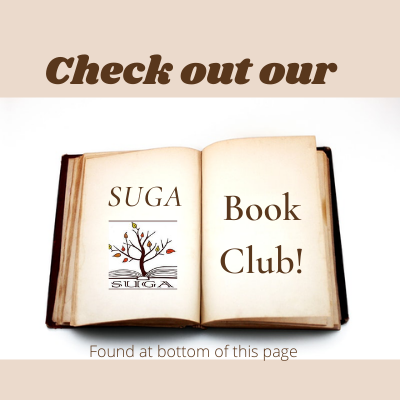 ​Please take note whether instruction will be conducted via Zoom or In-Person.

​ZOOM CLASSES - LINKS will be sent 5:00 pm ET evening before class.  ​Please check your spam folder if not received.

​***NOTE : COVID-19 protocol for In-Person classes are available HERE, as applicable.
​
Each Class Meets Once Per Week for one hour unless otherwise indicated.

Once you have become a member, please register for desired courses below: 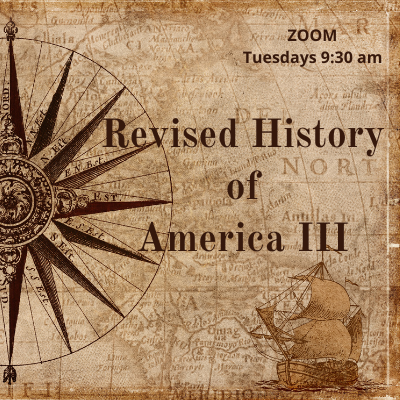 This is the final class in a 3-part series, but you don’t need to have taken the previous classes to take this one. This class starts with background to the American Revolution. Prohibitions against killing Indians and stealing their lands coupled with England’s taking action against slavery were the key causes of this Revolution, not taxation without representation. Was it a revolution or secession? The industrial revolution coincided with the Louisiana Purchase creating opportunities for enormous wealth which was, and continues to be, the focal point of America, thereby drowning out ideas of freedom and justice. Railroads provided an essential infrastructure for business and, when threatened, led to a Civil War -- a war motivated by commerce, not moral considerations. After the war, slavery remained, but was renamed “Jim Crow.” The Confederacy lost the fight, but in many ways, won the war. 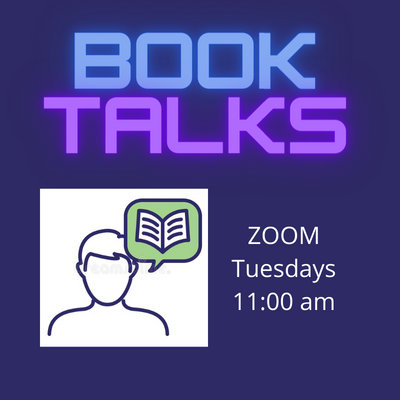 These talks, given in video presentations, are by authors who are well-known and have something to say. There will be time at the end for discussion with Norman.
Sept. 20 – STACEY ABRAMS, 2022 Democratic candidate for Ga. Governor, is a well-known author as well. While Justice Sleeps is a novel about a US Supreme Court clerk who is thrown into a complex situation involving her boss, a Justice!
Sept. 27 – HEATHER McGHEE’s specialty is the US economy, and why it so often fails. The Sum of Us describes how she found a root problem—from the 2008 financial crisis, to rising student debt, to collapsing public infrastructure: racism in our politics and policymaking.
Oct. 11 –MOSHIN HAMID’s new book, The Last White Man, is a modern adaptation of Kafka’s Metamorphosis. One morning, a man wakes to find that overnight, his skin has turned dark. Soon, reports of similar events begin to surface. Some see the transformation as the long-dreaded overturning of the established order that must be vehemently resisted. Others see it as an opportunity for rebirth.
Oct. 18 – MICHAEL LEWIS writes The Premonition: A Pandemic Story. The book’s characters are fascinating and unexpected. A 13-year old girl’s science project on transmission of an airborne pathogen develops into a very grown-up model of disease control. A local public-health officer uses her worm’s-eye view to see what the CDC misses, and a secret team of dissenting doctors has everything needed to fight the pandemic, everything except official permission to implement their work!
Oct. 25 – WALTER ISAACSON’s The Code Breaker is about Jennifer Doudna. When she was in 6th grade, her dad left a paperback, The Double Helix, on her bed. She soon became enthralled by the intense drama behind the competition to discover the code of life. Driven by a passion to understand how nature works and to turn discoveries into inventions, she would help to make what was the most important biological advance since the discovery of structure of DNA. She and her collaborators invented an easy-to-use tool to edit DNA. Known as CRISPR, it opened a brave new world of medical miracles and moral questions.
Nov. 1 -- GARY SHTEYNGART has written a clever novel about living through the pandemic. Our Country Friends takes place in the rolling hills of upstate NY, where a group of friends gather in a country house to wait out the quarantine. Over the next 6 months, new friendships and romances take hold, while old betrayals emerge, forcing each character to reevaluate whom they love and what matters most.
Nov. 8 – In AMOR TOWLES’ novel, The Lincoln Highway, it is June 1954 and 18-year old Emmett is driven home to Nebraska by the warden of the juvenile work farm where he has served 18 months for involuntary manslaughter. His mother long gone, his father recently deceased, and the family farm foreclosed upon, Emmett’s intention is to pick up his 8-year-old brother and head to California where they can start their lives anew. But when the warden leaves, Emmett discovers that two friends from the work farm have hidden in the trunk of the warden’s car! They have hatched an altogether different plan for Emmett’s future, one that will take them all on a fateful journey in the opposite direction – to the city of New York.
Nov. 15 -- YUVAL NOAH HARARI has a PhD in History from the University of Oxford and lectures at the Hebrew University of Jerusalem, specializing in world history. His books have been translated into 65 languages, with 40 million copies sold worldwide. Sapiens: A Brief History of Humankind (2014) looked deep into our past, Homo Deus: A Brief History of Tomorrow (2016) considered far-future scenarios, and 21 Lessons for the 21st Century (2018) zoomed in on the biggest questions of our day. Sapiens, A Graphic History (2020) is an adaptation of his 2014 book into a graphic novel series. This presentation is with Nobel Prize winner, and behavioral economist, Daniel Kahneman, author of Thinking Fast and Slow. 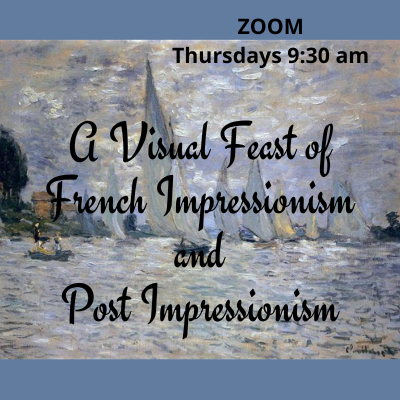 A VISUAL FEAST OF FRENCH IMPRESSIONISM AND POST IMPRESSIONISM
Zoom
9:30 a.m.
Lisa N. Guyton, artist and art educator
​
The Impressionist/Post-Impressionist art movement in Europe significantly influenced the development of modern art and it continues to be important to artists and art lovers today. This course will focus primarily on French artists beginning in the late 1880s who developed the Impressionist style. Major works and artists of Impressionism (e.g., Monet, Degas, Renoir) and Post Impressionism (Seurat, Van Gogh, Cezanne, Matisse) will be discussed. The Salon, French café society, and Impressionist exhibits will be examined, along with the female artists of the period.  This course will be a visual feast, as well as an opportunity to better understand the ideas and practices of these artists.  Student questions and discussion are encouraged. 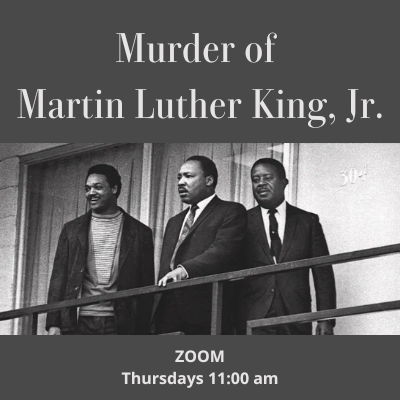 Exactly one year before he was assassinated in Memphis, Martin Luther King Jr. addressed the Riverside Church in New York about the moral depravity of the Vietnam War. Did this play a part in his assassination? Researchers have documented nine attempts upon his life between 1958 and 1968 by white supremacists. Did the Christian Identity movement, a white supremacist cause operating under the cloak of religion, perhaps play a part? This class will examine these questions along with the FBI’s smear campaign against Dr. King.
Recommended reading: 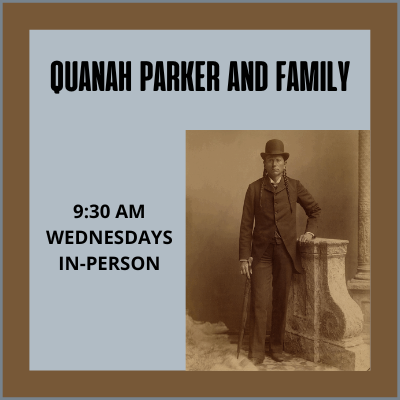 Quanah Parker was a famous leader of the Comanche in the 19th and into the 20th century. His father was Peta Nocona and his mother was a white woman, Cynthia Ann Parker. Cynthia Ann is perhaps the most famous of the captives kidnapped by the Native Americans in the west. Quanah Parker was both an expert warrior and a gifted diplomat for his people. After the Indian wars, he was a successful cattle rancher and leader of his people. He was responsible for creating the peyote-based religion which spread to other tribes.  He had seven wives and many children, and was a friend of Teddy Roosevelt. 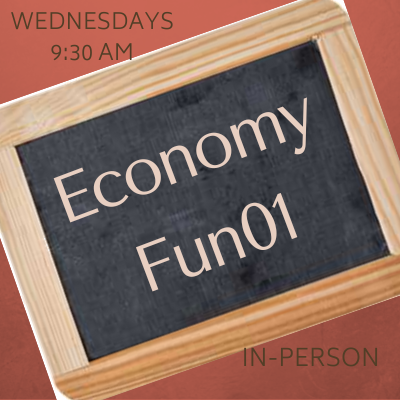 This is a class for those who don’t think learning about economics and discussing current economic issues can be fun.  There’s no textbook; the only homework is to listen to “The Indicator,” a short (always less than 10 minutes) daily podcast that presents current economic-related issues in an incredibly entertaining fashion (https://www.npr.org/podcasts/510325/the-indicator-from-planet-money).  We’ll discuss the fascinating questions raised in these podcasts.  We’ll also explore the behavioral economic factors that relate to the specific issues presented and the most current (and surprising) behavioral science findings from around the world. 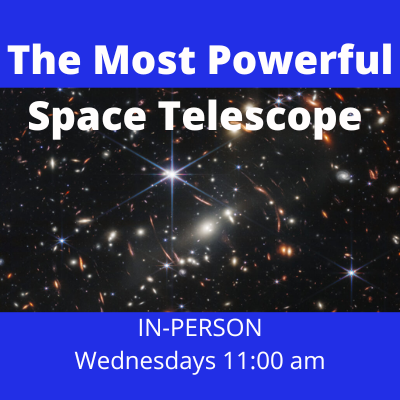 On Christmas day 2021 the James Webb Space Telescope was launched amid much celebration and long-awaited expectations. What is it about this unique space telescope that makes it so news-worthy? What will this telescope reveal about the universe that will transcend our current knowledge? In the first half of this 8-week course we’ll cover the history, incredible engineering feats, and the science of this special telescope. The latter half of the course will be about the latest in planetary explorations and mankind’s recent efforts to reach the planets. 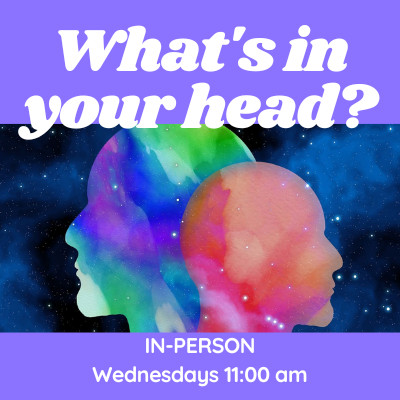 Back for its thirteenth season, the game combines the love of trivia, cultural literacy, and the memories of what we learned in school into a team sport. You will work within a randomly selected group of five or six, putting your heads together to come up with more correct answers than the other teams. What you didn’t know, you will learn. Having fun is more important than being smart, but winners do get applause. 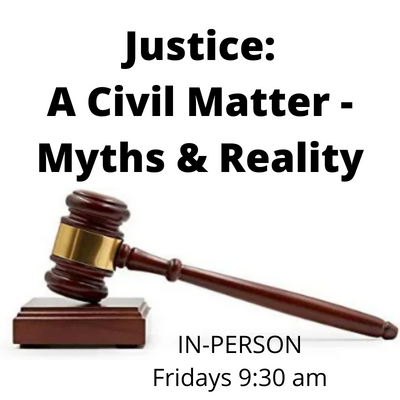 Civil law cases include personal injury, employment, contested wills, divorce, real estate and other business disputes.  If most people have any experience with civil law matters, it is with divorce or a personal injury. The legal system isn’t like it is on TV, where most of the cases are in criminal court. This course will go through the process of what is involved in going to court in a civil suit.  Joy Glucksman has invited eight different speakers who will talk about the procedures of civil court, not about these substantive legal fields. Starting from the beginning, the filing of a Complaint, the course will continue going through the major steps and pitfalls in a civil lawsuit through verdict and appeal. Each week, a practicing attorney will talk about a subject so you can know what to expect if you are ever injured, have a business or real estate dispute, experience an employment problem, or seek a divorce. The last class will be on mediation and arbitration, and will explain the difference between the two. 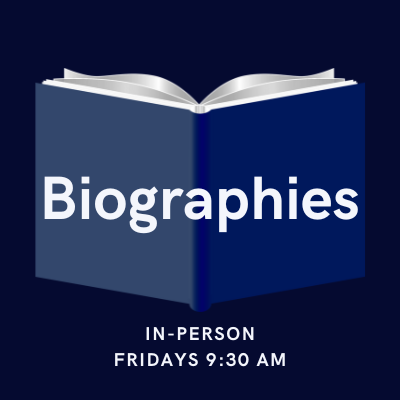 Kay has worked hard to get various SUGA members to select people they admire to present mini-biographies for your enjoyment! Come see who your fellow classmates have selected. Kay reports that she has selected Thor Heyerdahl!

This two-part class will look at two very different yet influential American institutions.  Part I is called, “Rummaging Through America’s Attic: The Smithsonian,” and will take an in-depth look at the fascinating history, present and future of the largest museum and research institution in the world.  Part II, entitled “The Shakers:  Celibacy, Simplicity and Style,” will explore the lasting impact of this small religious sect on American style, architecture, music and more.  Please join Jeff Milsteen for this informative and entertaining look at two uniquely American institutions. 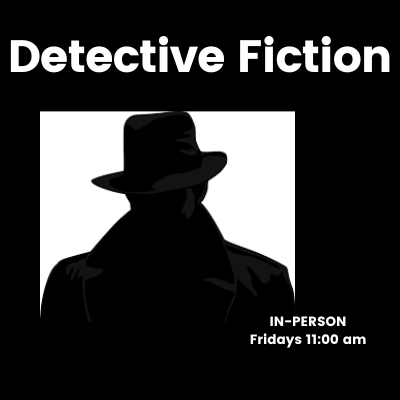 In SUGA’s second Detective Fiction course by Bob Knowles, we’ll explore authors and adaptations of favorite mystery stories. We’ll also take a look at more recent writers and their contributions to detective fiction, And we’ll try to get to the heart of the genre and search for the qualities of writing and production that have drawn and continue to attract so many new mystery devotees. 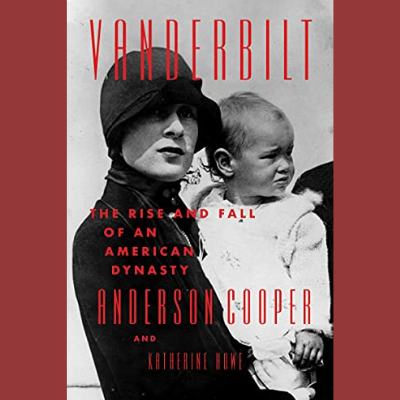